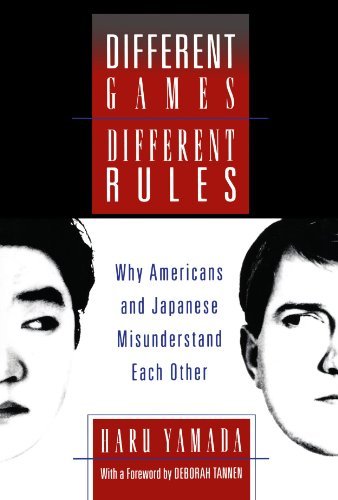 Japan and the United States are in closer contact politically and economically than ever before, yet in many ways our nations are as far from mutual understanding as ever. Misconceptions and miscommunications between East and West continue to plague this important relationship, frustrating the best efforts of both cultures to work together. Stereotypes abound: Americans see Japanese as evasive and inscrutable, while Japanese see Americans as pushy and selfish. What causes these persistent misunderstandings, and what can be done to avoid them?
Fluent in both languages and at home in both cultures, Haru Yamada brings an insiders perspective and a linguists training to this difficult question, illuminating the many reasons why Americans and Japanese misunderstand one another. Social organization, she explains, shapes the way we talk. Because American and Japanese cultures value different kinds of social relationships, they play different language games with different sets of rules. In America, for instance, Aesop’s fable about the grasshopper and the ants ends with the ants scorning the foolhardy grasshopper. In Japan, however, the story has a very different ending: the ants invite the grasshopper in to share their winter meal, as they appreciate how his singing spurred them on during their summer labors. In the difference between these two endings, argues Yamada, lies an important lesson: Americans, because of their unique political history, value independence and individuality, while Japanese value mutual dependency and interconnectedness. The language of both cultures is designed to display and reinforce these values so that words, phrases and expressions in one language can have completely different connotations in another, leading to all manner of misunderstanding. Yamada provides numerous examples. In Japan, for instance, silence is valued and halting speech is considered more honest and thoughtful than fluid speech, while in America forthright, polished speech is valued. Likewise, the Japanese use word order to express emphasis, while Americans use vocal stress: a listener unaware of this difference may easily misunderstand the import of a sentence. In a lucid and insightful discussion, Yamada outlines the basic differences between Japanese and American English and analyzes a number of real-life business and social interactions in which these differences led to miscommunication. By understanding how and why each culture speaks in the way that it does, Yamada shows, we can learn to avoid frustrating and damaging failures of communication.
Different Games, Different Rules is essential reading for anyone who travels to or communicates regularly with Japan, whether they are scientists, scholars, tourists, or business executives. But as Deborah Tannen notes in her Foreword to the book, even those who will never travel to Japan, do business with a Japanese company, or talk to a person from that part of the world, will find the insights of this book illuminating and helpful, because the greatest benefit that comes of understanding another culture is a better and deeper understanding of one’s own.

On February 2, 2020By Toy Coupons In Learning Games